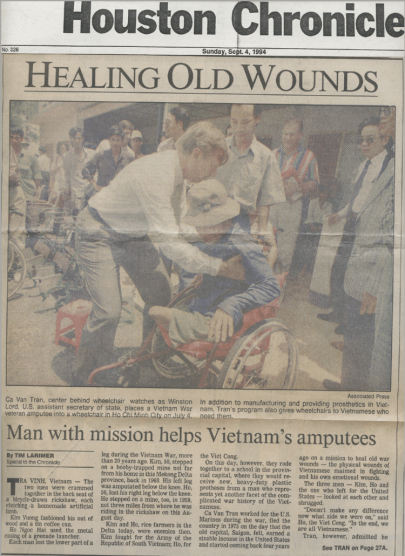 By TIM LARIMER - Special to the Chronicle

Tra VINH, Vietnam — The a two men were crammed together in the back seat of bicycle-drawn rickshaw, each clutching homemade artificial limb.

Kim Vuong, fashioned his out of wood and a tim coffee can.

Each man lost the lower part of a leg during the Vietnam War, more than 20 years ago. Kim, 50, stepped on a booby-trapped mine not far from his home in this Mekong Delta province, back in 1968. His left leg was amputated below the knee. Ho, 56, stepped on a mine, too, in 1959, not three miles from where he was riding in the rickshaw on this August day.

Kim and Ho, rice farmers in the Delta today, were enemies then. Kim fought for the Army of the Republic of South Vietnam; Ho, for the Viet Cong.

On this day, however, they rode together to a school in the provincial capital, where they would receive new, heavy-duty plastic protheses from a man who represents yet another facet of the complicated war history of the Vietnamese.

Ca Van Tran worked for the US. Marines during the war, fled the country in 1975 on the day that the old capital, Saigon, fell, earned a sizable income in the United States and started coming back four years ago on a mission to heal old war wounds — the physical wounds of Vietnamese maimed in fighting and his own emotional wounds.

The three men - Kim, Ho and the one who left for the United States - looked at each other and shrugged.

“Doesn't make any difference now what side we were on,” said Ho, the Viet Cong. “In the end, we are all Vietnamese.”

Tran, however, admitted he

See TRAN on Page 27A.
Remainder of article missing