Inclusion of the Vietnamese with Disabilities 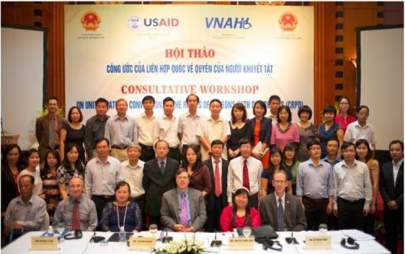 The overall goal of the program is a greater opportunity for the inclusion of Vietnamese with disabilities (IVWD).

With funding from USAID, IVWD has worked in partnership with the Government of Viet Nam and local partners over the past 10 years to develop policy, promote the employment of persons with disabilities and enforcement of policies as well as capacity building for coordination of disability policies and programs.

This booklet provides the readers with an overview and achievements of the project and further detail of the projects under the 5 major components:

Number of service providers trained and persons with disabilities benefited:

1. UN Convention on the Rights of Persons with Disabilities on 28 November 2014 by VN National Assembly

The Convention on the Rights of Persons with Disabilities was officially ratified by the Vietnam National Assembly on November 28th 2014. This milestone achievement was the result of a long process of advocacy, recommendations and justification by MOLISA, related government agencies, disability advocates and disability community to promote for the CRPD ratification. IVWD was a major contributor to this achievement through technical assistance, developing and consultation for the proposal on CRPD ratification, and continued technical support during hearing sessions at the National Assembly.

The national Law on Disability, the highest legal framework on disability that influences more than 10 million of persons with disabilities in the country. The enactment of the Law also resulted in improvement in sector policies that ensure equal opportunities for persons with disabilities to access all aspects of the society, such as policies in social protection, employment, education, health care, construction, transportation.

The National Action Plan to support people with disabilities (NAP) for the 2006-2010 period, approved under the Prime Minister’s Decision No. 239 in late 2006, is an impactful achievement in mainstreaming the disability agenda into national planning and programming works.

The National Action Plan on Rehabilitation (NARP) was approved by Ministry of Health (MOH) Decision No. 4039/QD-BYT dated 06 October 2014. The NARP of Thai Binh, Binh Dinh, Binh Phuoc provinces was developed and approved with the assistance of VNAH.

In FY15 MOLISA issued a Directive (3930/LĐTBXH-TCDN dated 21 October 2014) to all provincial Peoples’ Committees to request strengthening of vocational training and employment for persons with disabilities. This Directive provided a platform for provinces to develop their local action plans. It also requested local governments to allocate 20% of the fund (from the national target program for vocational training for rural workers) or an amount equivalent to $10 million a year for vocational training of PWD. 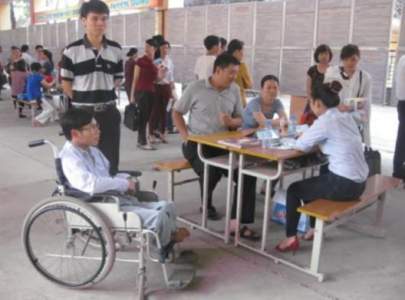 As result of IVWD supports, the Vocational Training Law, which was approved by the National Assembly in 2007, included an entire Chapter with six articles related to vocational training for people with disabilities. Disability mainstreaming into Vocational Training Law as a result of this program, which enabled large number of persons with disabilities to access vocational training and obtain employment, also opened up opportunities for further inclusion of disability issue in related planning/programming at national and local levels.

On June 18, 2012, the amended Labor Code was officially enacted by the National Assembly of Vietnam. The new Labor Code, with 4 disability-friendly articles and a chapter of 3 disability-specific articles, is more disability-sensitive and ensures equal opportunity and removal of discrimination against persons with disabilities at work or access to job opportunities. It supported MOLISA to include articles concerning PWDs in the Labor Code.

VNAH worked with the World Bank, MCNV and NCCD to support the General Statistics Office to incorporate a disability module that adopted the International Classification of Functions (ICF) approach in the Vietnam Household Living Standards Survey of 2006-2008 The survey was completed and report released by the General Statistics Office in early 2008 with the following findings: Disability prevalence in Vietnam is 15.3% and Viet Nam more than 12 million persons with disabilities.

- Accessibility codes and standards in construction

During the 2006-2008 period, VNAH supported the Ministry of Construction (MOC) to revise the accessibility codes and standards. Barrier free access have been complied in many major public facilities, including:

7. Accessibility codes and standards in transportation 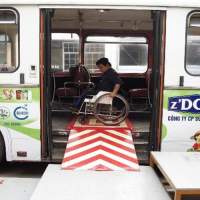 Another major achievement of the program was the inclusion of accessible transport for persons with disabilities in the revised Transportation Law, which was enacted in 2008.

Among major achievements of the IVWD program were the enactment of a Circular on ICT accessibility and 03 national accessibility standards on ICT, including:

During 2006-2008, five Accessibility Enforcement Units on Construction were established under the Departments of Constructions (DoCs) of Ninh Binh and Quang Nam, Danang, Hanoi and Ho Chi Minh City provinces to promote enforcement of the barrier-free accessibility standards in construction

The Disability Information System (DIS) is one of the most impactful achievements of the IVWD program. Starting in Da Nang as a pilot model since 2009, until now DIS has been successfully replicated to 14 provinces. IVWD collaborated with PDSP/DAI to expand DIS in some of these provinces. By the end of December 2015, DIS data has a total of 376,300 records (of individuals with disabilities) in 14 provinces where DIS is currently being in use. At the central level, The program supported MOH to install and operate national DIS system based at the Bureau of Medical Administration (for MOH) and at NCCD (for MOLISA) that would enable disability data collection and reporting at national level.

The program supported the establishment of NCCD in 2002, and continued supports and partnerships for its operation until recently. Over the years NCCD was recognized for its roles within the GVN as a focal point for promoting disability policy development, planning, and coordination, monitoring and a driving force behind the enactment of the Disability Law, the NAP and related policies guiding implementation of the Law. NCCD with the assistance of IVWD developed and enforced the M&E framework which covers 9 disability related components. 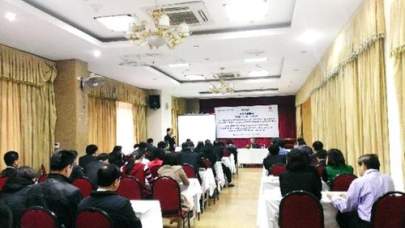 The Decree of Administrative Fines for Violations of the Disability Policies which covers all sectors related to persons with disabilities including employment, vocational training, education, health care, accessibility and others, approved by the Government/Decision 144 on 29 October 2013.It regulates the acts of violations, the corresponding fines for those acts and responsibilities of authorized government bodies in imposing and executing penalty/fines. This is a strong measure for enforcement of the national law on disability.

VNAH supported SPD/MOLISA in the development and finalization of MOLISA Circular on Case Management for Persons with Disabilities, resulting in the approval of the Circular 01 on the 6th of January 2015. This is the first legal document that regulates the process for delivering services for persons with disabilities, and the roles of social workers and other related stakeholders at all levels to ensure the coordination of the services.

In 2010, the Vietnam Federation on Disability was established as an organization to coordinate communication and networking with all DPOs, self help groups, and local NGOs working as advocates for persons with disabilities. IVWD has supported its mobilization and formation efforts, in conjunction with NCCD. IVWD provided training in advocacy and leadership to VFD and supported staff and a local consultant to assist them in establishing a strategic plan to further define and carry out their mission. 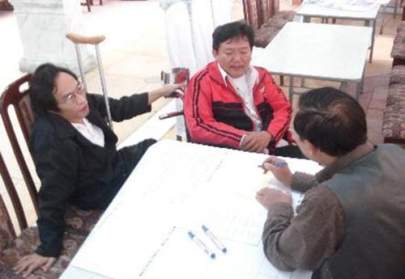 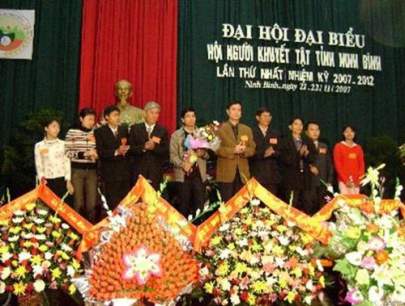 IVWD has partnerships with national universities to develop textbook on social work with persons with disabilities for both the B.A. and M.A. levels, develop a cadre of master trainers, program field work. 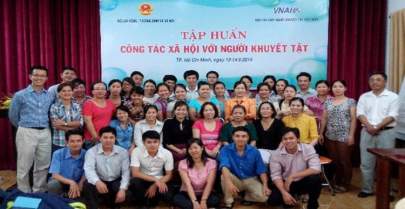 The development of the vocational training curriculum was led by the Hanoi Medical University with technical assistance from an U.S expert/lecturer of vocational rehabilitation.

The program has successfully assisted Hanoi University of Transportation (HTU) in the development of a first curriculum on accessible transport to train second year students. International experience from USA, UK, Canada, Brazil and comments from Vietnamese experts, persons with disabilities were shared and incorporated into the final curriculum. 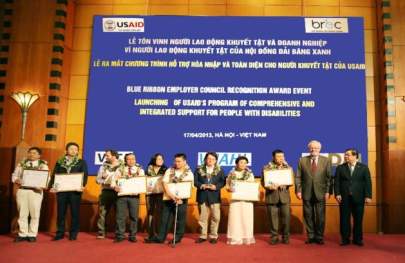 Blue Ribbon Employer Council (BREC), a national employer council established in 2007 through a cooperative agreement with Vietnam Chamber of Commerce and Industry (VCCI), BREC began with 25 members and now has 270 local and international employers including such major companies as Nike, IBM, Protec etc and Director Board members in 3 regions.

The Vocational Rehabilitation (VR) pilot in Danang was set up at the Danang Employment Services Center as the focal point. The network involved services providers including rehab hospitals, vocational schools, employers, social workers and CBR workers etc. It demonstrated an integrated service and one that is coordinated with relevant service providers in the community.

The Guidelines was finalized, printed and distributed to all provincial Employment Service Centres (ESCs) nationwide.
03 training workshops on the provision of vocational rehabilitation and employment services for persons with disabilities were organized in Danang, Hanoi and Ho Chi Minh City. 70 representatives from all provincial ESCs, disability community, and vocational training centres and rehabilitation centres in the three regions were trained. 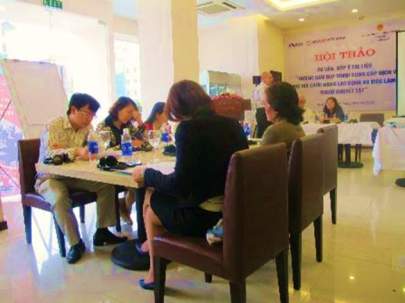 Through technical assistance and capacity building, the program was able to expand and strengthen the capacity of NCCD, VFD, DPOs as service providers, as participants in law and policy formulation and as disseminators of law and policy information. As such, persons with disabilities were able to establish their presence within the government as they are now invited to provide public input into deliberations on policy issues.

Comprehensive and reliable national databases on adults and children with disabilities would improve the government’s ability to formulate, implement and coordinate laws and policies. At the central level, MOH has created a platform for the DIS linkage to the MOH website, MOLISA is intended to create a database on social protection recipient including persons with disabilities. At the provincial level, several provinces plan to continue to use DIS including Da Nang and Dong Nai, Thai Binh who have assigned staff to maintain the system.

A variety of methods were developed and implemented with VNAH assistance to provide vocational and employment supporting services including employment council (BREC), job preparedness and placement support. Staffs of Employment Service Centers noted that the vocational rehabilitation services will continue beyond the life of the program since it has become a routine activity. 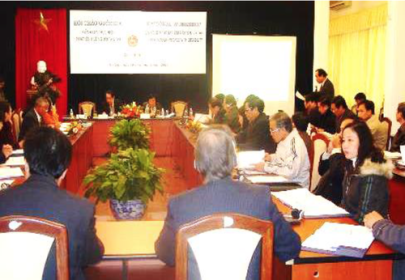 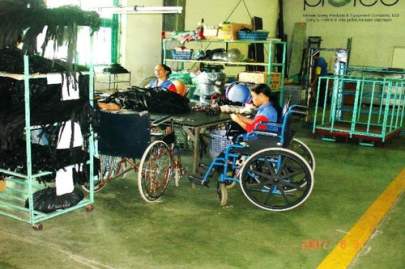 A variety of methods were developed and implemented with VNAH assistance to provide vocational and employment supporting services including employment council (BREC), job preparedness and placement support. Employment Service Centers noted that the vocational rehabilitation services will continue beyond the life of the program since it has become a routine activity.

The IVWD faced a number of constraints during this program period. There were frequent delays in program start up in the early stages of each phase. Many were the result of the busy schedule of government partners not only in negotiating the MOUs and Cooperative Agreements but also during the implementation of program activities. The partners had scheduling conflicts because of their other responsibilities which were sometimes of a higher priority to them, thus creating delays. Additionally, during the program there were structural changes within government partners because of staff changes at the higher decision making levels.

Another constraint was the time needed to bring greater awareness to government leaders about the principles of disability and a movement toward a rights based approach. This attitudinal change was time consuming but necessary if laws, policies, decrees, etc., were to move forward in a rights based direction; and if that movement included the full and active participation of persons with disabilities.

Obviously, the budget resources from the government was also a constraint, especially because if/when laws were enacted and policies were written, there needed to be major resources authorized for the implementation of these policies.