This is a third project supported by ASHA/USAID in the Danang area. The project was implemented during 10/2014-9/2016, by VNAH and the Dong A University (UDA) in Quang Nam and Danang City. The project objective was to improve the capacity for, and access to higher education and vocational training to ensure young people and the vulnerable populations receive industry-driven training and needed skill sets for employment.

Prior to this project, during 2006-2007, with ASHA support, VNAH has built and equipped a rehabilitation department at the Binh Dan General Hospital, with a purpose to improve rehabilitation services for people with disabilities, and technical support and transfer of American practices in rehabilitation medicine to Vietnam.

Below are major results of the most recent project with the Dong A University: 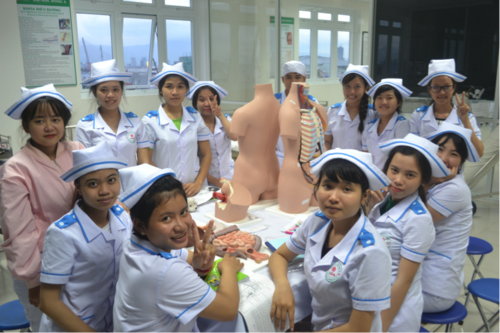 The project has significantly enhanced the capacity of the UDA in provision of practice-based training in electrical skills, hospitality management and nursing. Prior to the project’ support, the UDA campuses in Quang Nam and Danang offered only small classes, mostly in theory while practice was limited to non-operational models due to the lack of real-operational models or appropriate labs. ASHA assistance has successfully assisted UDA to solve that problem. The UDA now is able to offer training in the “on premises”– facilities equipped like a real operation or business, which gives students practical work opportunities which prepare them for jobs in the industries for which they have been trained. As a result, the UDA has seen steep increases in enrollments, especially in the three majors that the ASHA has provided commodities to. The new enrollment in this school year (2016-2017) increased by 65% (from 915 to 1,510 students) in nursing program; and 88% in the electrical program (from 199 to 375 students); and 14% in the hospitality management (from 277 to 315 students), compared to previous years. Prior to the project, these programs have an average increase of 10% annually. These results are strong indicators of the project successes in capacity building for the UDA.

Another project objective was to assist the UDA to learn and adopt the American practices in training of nursing, hospitality management and electrical skills. In this regard, the UDA has entered into an Memorandum of Understanding with the Slippery Rock University in Pensevenia in 2015, which outlined collaboration in training, sharing educational meterials, and joint-training programs for Vietnamese students seeking studying in the U.S. Subsequently, the Slippery Rock University (SRU) has sent two faculties to Vietnam to work with the UDA, and vice versa, the UDA management team has visited the SRU and other institutions in the U.S for two times. Among of the SRU teams visited and assist the UDA were the senior faculty members of the nursing and hospitality management. They have worked with and assisted UDA faculty members to review and update the UDA training syllabus and materials for the nursing and hospitality management programs. The SRU teams also shared its training materials and practices, and provided training of trainers for 45 lecturers of the UDA. During these visits, local businesses were also invited to attend discussions and sharing experience regarding collaboration between the univeristy and business community. Besides the SRU, the project has arranged for a numbers of American experts in health and nutritionto visit and conduct seminar for UDA lecturers and students on issues including nursing quality improvement, infant nutrition and breastfeeding and community births. UDA by itselt has continued to maintain contacts with the U.S institutions and individuals that were connected by the project.

Result 1.3: Increased enrollment of vulnerable populations – including persons with disabilities, persons from ethnic minorities and from poor households 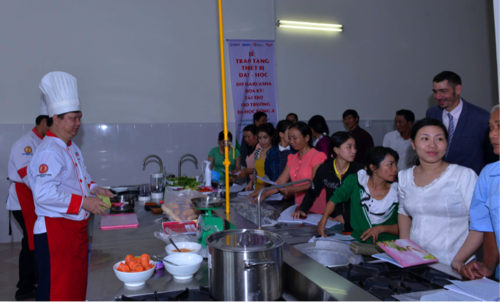 Another important effort of the project was to assist and work with the UDA to improve access to quality education for the vulnerable population in the region. As a result, the UDA over the 2 year course of the project has made significant efforts to increase services and supports for students from the vulnerable groups. It has provided additional scholarships, discounted tuition fees and other financial supports to several hundred students with disabilities, students from ethnic minorities and those from the poor households (poverty classified by government). The UDA has conducted more community outreach and communication programs in mass media, social networks, and with high schools, social organizations and local governments in the region to promote its educational programs and preferential supports to the vulnerable students. These contributed to the increased enrollments, including the vulnerable. Moreover student receiving scholarships, discounted tuition fee and other financial supports has increased significantly. During the calendar year of 2015, the UDA has provided support to a total 1,032 students, an increase by 32% compared to previous year of 2014, or before the project started. The UDA management explained that it was able to increase supports for students thanks to the assistance from ASHA and other sources, which helped the school to partially offset the other investments and expenditures. In the calendar year 2016, the three faculties supported by the ASHA project (electricity, hospitality and nursing) alone have provided supports to 559 students. The beneficiaries of these supports were those from families affected by war, poor families or ethnic minority groups and students with disabilities. In addition to its regular degree training, the UDA has organized short course training (up to 3 months). For instance, it offered training in cooking – by utilizing equipment provided by ASHA - to train at discounted fee for 118 disabled women, and women of ethnic minority groups as well as kindergarten teachers from the rural areas. The training purposes was to equip the participants with skills to start up a small business, or to improve their existing business, and as for the teachers, to cook and feed properly their boarding children.