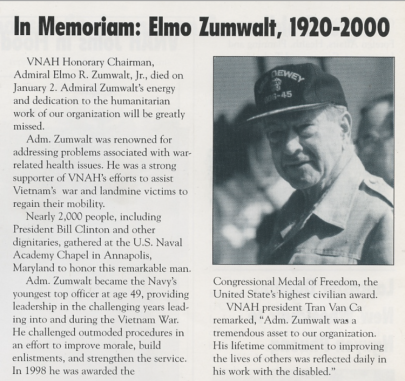 Adm. Zumwalt was renowned for addressing problems associated with war-related health issues. He was a strong supporter of VNAH's efforts to assist Vietnam's war and landmine victims to regain their mobility.

Nearly 2,000 people, including President Bill Clinton and other dignitaries, gathered at the U.S. Naval Academy Chapel in Annapolis, Maryland to honor this remarkable man.

Adm. Zumwalt became the Navy's youngest top officer at age 49, providing leadership in the challenging years lead­ing into and during the Vietnam War. He challenged outmoded procedures in an effort to improve morale, build enlistments, and strengthen the service.

In 1998 he was awarded the Congressional Medal of Freedom, the United State's highest civilian award.

VNAH president Tran Van Ca remarked, "Adm. Zumwalt was a tremendous asset co our organization. His lifetime commitment to improving the lives of others was reflected daily in his work with the disabled."