The Washington Times: September 1994 Edition: Retired Vietnam foes meet in Hanoi to 'bind up our wounds' 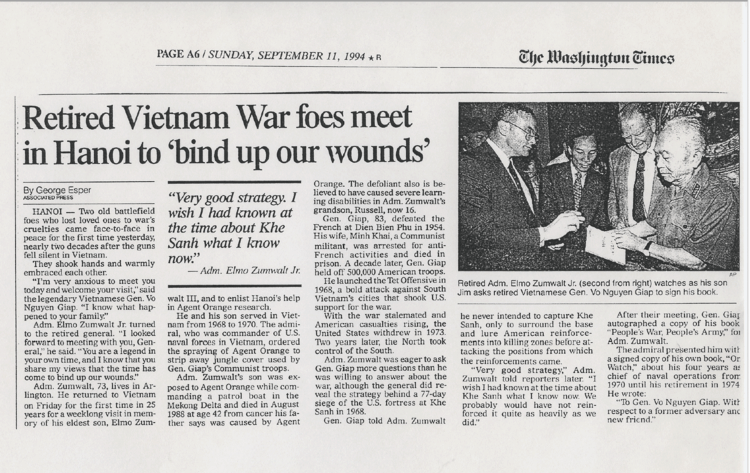 They shook hands and warmly embraced each other.

“I'm very anxious to meet you today and welcome your visit,” said the legendary Vietnamese Gen. Vo
Nguyen Giap. “I know what happened to your family”

Adm. Elmo Zumwalt Jr. turned to the retired general. “I looked forward to meeting with you, Gen-
eral,” he said. “You are a legend in your own time, and I know that you share my views that the time has come to bind up our wounds.”

Adm. Zumwalt, 73, lives in Arlington. He returned to Vietnam on Friday for the first time in 25
years for a week long visit in memory of his eldest son, Elmo Zumwalt III, and to enlist Hanoi's help in Agent Orange research

He and his son served in Vietnam from 1968 to 1970. The admiral, who was commander of U.S.naval forces in Vietnam, ordered the spraying of Agent Orange to strip away jungle cover used by
Gen. Giap'’s Communist troops

“Very good strategy. I wish I had known at the time about Khe Sanh what I know now.”

Adm. Zumwalt’s son was exposed to Agent Orange while commanding a patrol boat in the Mekong Delta and died in August 1988 at age 42 from cancer his father says was caused by Agent Orange. The defoliant also is believed to have caused severe learning disabilities in Adm. Zamwalt’s grandson, Russell, now 16.

He launched the Tet Offensive in 1968, a bold attack against South Vietnam's cities that shook U.S.
support for the war.

With the war stalemated and American casualties rising, the United States withdrew in 1973. Two years later, the North took control of the South.

Adm, Zamwalt was eager to ask Gen. Giap more questions than he was willing to answer about the war, although the general did reveal the strategy behind a 77-day siege of the U.S, fortress at Khe
Sanh in 1968.

Gen. Giap told Adm. Zumwalt he never intended to capture Khe Sanh, only to surround the base and lure American reinforcements into killing zones before attacking the positions from which the reinforcements came.

“Very good strategy” Adm.Zumwah told reporters later “I wish I had known at the time about Khe Sanh what I know now. We probably would have not reinforced it quite as heavily as we did.”

After their meeting, Gen, Giag autographed a copy of his book People’s War, People’s Army” for
Adm. Zumwalt.

The admiral presented him with a signed copy of his own book, “Or Watch” about his four years as chief of naval operations from 1970 until his retirement in 1974.

He wrote: “To Gen. Vo Nguyen Giap. With respect to a former adversary and new friend”